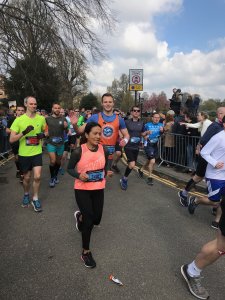 Meet Tom (my son) who, when his friend mentioned signing up for the Brighton marathon three months ago, decided to join him and raise money for International Animal Rescue.

Now its fair to say Tom does not enjoy running, yet he does enjoy a challenge. He decided to set himself a target of a sub four-hour marathon.  With an unhealthy lifestyle as a uni student, not putting in enough training, and his friend pulling out because of injury, Tom needed inspiration to achieve his goal.

The day before we watched ‘Run fat boy run’, about an unfit man training for a marathon.  The words from the film, ‘run like the wind’ struck a chord and became Tom’s mantra.  Having set himself a target  time of 3:53:36, he certainly needed to ‘run like the wind’.

Another inspiration came from his friend who suggested reading the poem, ‘The Man in the glass’ by Dale Wimbrow.  Tom read the poem night before and the morning of the race.

When you get what you want in your struggle for self.  And the world makes you king for a day.  Just go to the mirror and look at yourself.  And see what that man has to say.

For it isn’t your father, or mother, or wife.  Whose judgement upon you must pass.  The fellow whose verdict counts most in your life.  Is the one staring back from the glass.

He’s the fellow to please – never mind all the rest.  For he’s with you, right to the end.  And you know you have passed the most difficult of tests.  If the man in the glass is your friend.

You may fool the whole world down the pathway of years.  And get pats on the back as you pass.  But your final reward will be heartache and tears. If you’ve cheated the man in the glass.

Cheering him on at 2, 13, and 18 miles we waited at the finish line, with baited breath, to see if Tom would achieve his target. He suddenly appeared amongst a sea of runners, with a finish time of 3:47.33, unbelievable. We rushed to greet him, only to discover he’d been taken to the recovery tent through cold and exhaustion. 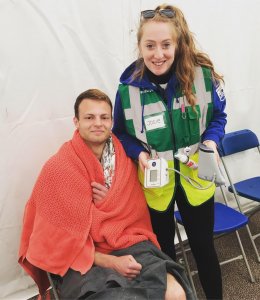 Tom told us later that at mile 18, he’d ‘hit the wall’ and wanted to give up, but remembered the film and told himself, ‘I’ll beat the wall’.  Worse was still to come.  The last three miles he was running into a head wind, yet he kept repeating the mantra, ‘run like the wind’.  Tom was running on empty but the words of the poem sustained him.  In the end ‘mind over matter’ carried him over the finish line.  He had achieved his goal of sub four hours beating his target of 3:53:36 by 6 minutes 33 seconds, with a finish time of 3:47:33. 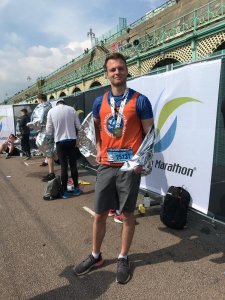 Tom now returns to his studies with the knowledge that whatever he puts his mind too, it is possible to achieve.

What professional / personal goal would you like to set and achieve that will stretch you? What obstacles are in the way? What are you prepared to sacrifice in order to achieve your goal? What resources will you need? Why is it important to you? Make a plan, write it down, find an image that represents your goal, and with daily focus and discipline, you may just achieve it. Good luck. ?

‘I am who I am today because of the choices I made yesterday’. — Eleanor Roosevelt