Rachel Morris | The Power of a Goal

Different things drive different people. For some it’s financial success, whilst others want to see the world or be on the X Factor. But then there are those that have a rare strength of character that is an inspiration to us all, and from which we can all learn. One of these people is paralympian, and twice gold medal winner, Rachel Morris.

At the age of six, Rachel drew a picture in her schoolbook of a medal and wrote underneath that she wanted to be an Olympic athlete. This is where her dream began.

Roger Black, the Olympic 400-metre silver medal sprinter, visited Rachel’s school when she was 11, which made her even more determined to compete at international level and, by the age of 18, she was representing Great Britain on the track. And then, catastrophe struck. Rachel contracted a rare and aggressive condition called reflex sympathetic dystrophy (RDS) – a malfunction of the nervous system that causes extreme pain and related sensory abnormalities. As a result, she lost both her legs.

A keen runner, with dreams of taking part in the Olympic Games, Rachel could have been forgiven for giving up on life but, instead, she channeled her energies into sport. Her childhood love of athletics turned into a passion for sailing and subsequently hand-cycling. And, in 2007, a British cycling disability coach spotted her potential and Rachel was placed on a full time training programme and given a custom made hand-cycle.

A double gold medal performance followed at the 2007 first-ever UCI Para-cycling Championships in Bordeaux, where she was crowned World Champion. Based on that performance, Rachel represented the sport in the 2008 Paralympics in Beijing where she won gold. Not only is she the first hand cyclist ever to compete for the UK, she is also the only British hand cyclist to be crowned double World Champion. So she was determined to represent Great Britain at the 2012 Paralympics, and defend her title. 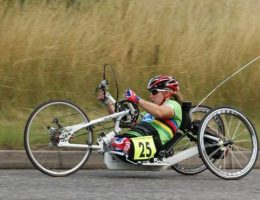 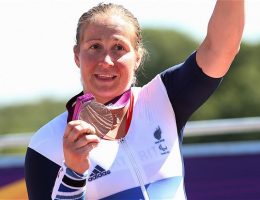 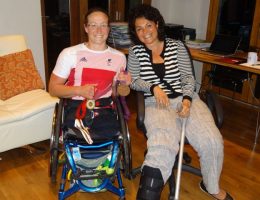 Rachel reveals that it is more than just a sport to her: “It’s a way of managing the pain; without the disciplines that hand cycling gives me, life becomes unbearable. It’s what I do, it’s what gets me up in the morning and it’s what I think about when I go to sleep. It is me,” she says.

Rachel’s mother applauds her daughter’s determination: “She’s out at 5.00am training, totally focused on her goal. People think she’s wonderful but she has to do it. Part of her pain management is to push her body hard, distract herself and release endorphins into her brain that help control the pain.”

The run-up to the London Paralympic Games was a long road filled with ups and downs, but one thing constantly spurred Rachel on – the honour of competing in the Paralympics in her home country. Competing in the games on your home turf could potentially be the pinnacle of a sporting career and she didn’t want anything to stand in the way of her dream.

However, just before the games, catastrophe struck for the second time. She was just six minutes into a time trial when a car ran into the offside of her hand-cycle, leaving her with whiplash and shoulder injuries, and the bike was destroyed.

“The bike went up into the air. I remember being aware that I was at the same height as the passengers in a car passing in the outside lane,” she says.

Rachel knew her participation at the Games was now at risk. But, thanks to an ‘amazing’ physiotherapist, Rachel competed at London and went on to win bronze. She said on her website “this bronze medal means more to me than the gold I won in Bejing.”

A chance conversation with my physiotherapist, Jane Ireland, led to me meeting Rachel. Jane had treated Rachel after her accident and, when I expressed an interest in meeting her, she said she would try and make it happen. A few days later an email popped into my inbox, from Rachel, suggesting a meeting. I was so excited, I couldn’t sleep properly, and a few days later she turned up at my home, complete with medals – amazing.

From Cycling to Rowing

We chatted for two hours and I learned more about her incredible journey and her decision to switch from cycling to rowing. “I had achieved all I can in cycling, so changing to rowing was about me needing something else to achieve,” she explained.

Rachel’s determination and hard work paid off and she was selected to represent Great Britain at the 2016 Paralympics in Rio, where she won an outstanding gold in the arms-shoulders women’s single scull boat. This amazing achievement was only three years after transferring from hand-cycling.

Never give up on your dreams

Rachel is a truly amazing person and her story shows that you must never give up on your dreams.

I’m a great believer in writing down your goals and not losing focus. Rachel Morris is a truly remarkable woman who would never have believed the journey she would have to follow to achieve her dream. It has been an honour and a pleasure to meet her and I will be following closely the next part of her incredible story.

‘I am who I am today because of the choices I made yesterday’. — Eleanor Roosevelt